The first semifinal between Brazil and the Dominican Republic took place on the fifth day of the Montreux Volley Masters 2013. The amazing duel was extremely close and intense during the whole match, despite the fact that Brazil won all its games compared to the Dominicans who lost one against the Italians. 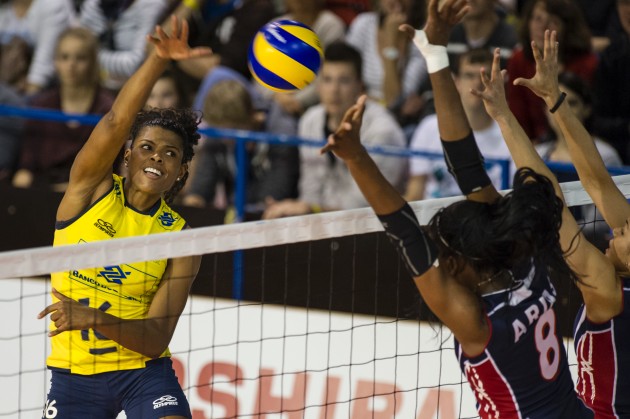 With a well set block-defense system, the Brazilians were able to lead the first set from the beginning to the end (25-19).The Dominicans bounced back in the second set, which they were leading in the first half, but the Brazilians were stronger and closed it at 25-18.The thrilling last set was led by the Dominicans who never gave up. However, the Brazilians did not let their opponents take breath and fought until the final ball on the score of 32-30. Brazil and the Dominican Republic were very tight in the number of kills with 38 and 44 respectively.

The difference was noticeable in the total of direct errors, with 10 for Brazil and 25 for the Dominicans. The best scorer of the match, the captain Fernanda Rodrigues, led her team to reach the final of the tournament, which will be against Italy or Russia.

Read the other news from this tournament on Montreux Volley Masters 2013.