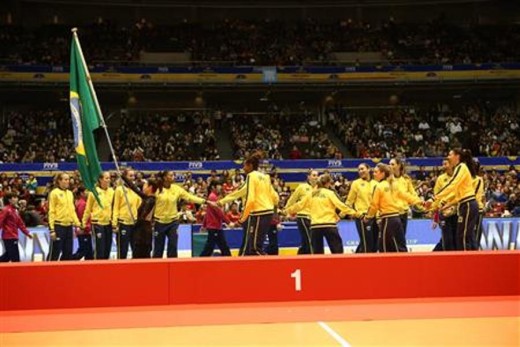 “Of course I’m very happy about this result. This last match was very dangerous for us. The key to this match was the first set. We were four or five points down and then we made a double change, bringing in Claudia and Monique who played very well. It’s difficult to play Japan every time. It’s always difficult to stop them, to block and defend, but Camilla, our libero, played really well tonight and helped us in many situations. I think we were a bit lucky at critical moments. But also the characteristics of my team are important. We adjust during the match; we adjust our block and defence and the players focus at important moments.”

(Meaning of winning gold): “For me, it means my dream, but in my mind it means I can rest in peace in Brazil. In Brazil, second place and last place are the same.”

(Re. Japan): “In the last Olympic cycle we lost two or three times to Japan. I respected Japan very much because they grew up more than other teams in those four years. Technically speaking Japan is a wonderful team. Of course, they need to improve their block, but before 2009 Japan were always sixth or seventh in the world; now they are on the podium every time. They improved and I think they are close to us.”

“This is a great team and I’m really happy about what we achieved. It wasn’t an easy tournament and I got the MVP award because of my team. All the players gave me this. Today, we made mistakes in the first set but we picked up in the second and third and started blocking, defending and serving well. It was a good team effort. Japan is always a fast team, but they used to attack a lot down the centre, but today I noticed they attacked a lot from the side, so it was tough for us.”