The quarterfinals of the men's volleyball Superleague 11/12 starts this Friday (16.03), with the confrontation between the first placed in the qualifying stage, Sada Cruzeiro (MG), and the eighth BMG / Sao Bernardo (SP). The match will be at 21h, in the hall Riacho in Contagem (MG). All games will be broadcast live on the channel Sportv. 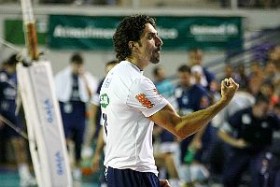 Despite the distance in the standings, the two sides clash in a balanced match. One of the most experienced players in the team of Sada Cruzeiro, the setter Filipe, highlights the value of the opponent’s play-off.

“Now we have a young team and I think the only advantage we have is to play the match at home. BMG / San Bernardo is a team that has been together for a long time, showed their strength in competition and it will be a tough game.
In a tournament such as this you can not relax at any time. We have to play every match like a final. “

One of the highlights of the team from São Paulo, the opposite Renan, believes that the team has improved during Super League.

“We know the quality of team of Sada Cruzeiro. We had two very difficult games against them, but we know that in this play-off we are in a better position to face them than in the classification stage.”

In the qualifying round, Sada Cruzeiro won both games. The first was in São Bernardo (SP), on December 17, when they won with 3:0. In the second match in Contagem (MG), on February 4, they took another victory by the same score.

The first round of quarterfinals of the Super league will be on Saturday (17.03) and Sunday (18:03).
On the first day the confrontation will be between Cimed / SKY (SC) and Vivo / Minas (MG).
It will start at 21:30h in the hall Capoeirao, in Florianopolis (SP).

The other two matches will begin on Sunday.
In the first, SESI – SP will open the series at home, in the hall Vila Leopoldina, São Paulo (SP), against RJX (RJ).
In the second match will meet Volei Futuro (SP) and Medley / Campinas (SP) in Placido Rocha in Araçatuba (SP).

FIRST ROUND OF THE QUARTER FINALS