Main favorites to win the 2017 Men’s Volleyball CEV Cup, Diatec Trentino and LPR Piacenza, supremely qualified to the quarterfinals and will face each other in the battle for the semis! 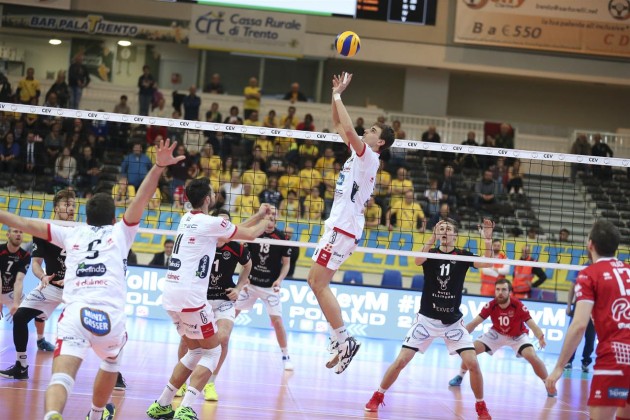 Trentino gave one set away in the second leg against Finnish VaLePa Sastamala, sweeping the rivals 3-0 in the first match. Belgian Simon van de Voorde stood out in the attack of the winning team with 15 points, while Gabriele Nelli had impressive serving display with five aces.

Even without Samuele Papi and Hristo Zlatanov, Piacenza achieved another straight-set win over Serbian representatives Vojvodina Novi Sad thanks to 13 points from Simone Parodi.

Clash between the two giants in their respective countries, Tours and P.A.O.K. Thessaloniki, went to the French side. Tours had to materialize a capital 3-2 win from the first leg in Thessaloniki and they did it by beating Greek title holders P.A.O.K. 3-1 at home court with 21 points each from Canadian Ryley Barnes and Brazilian Lévi Cabral.

Golden set had to resolve encounter between Swiss champions Amriswil and G.F.C. Ajaccio of France since it was 3-1 apiece. The team based on Corsica island prevailed 15-12 to qualify for the quarterfinals. Macedonian Jovica Simovski highlighted Ajaccio with 26 points.

French runners-up Arago de Sète were demolished in a rematch against Belgian Lindemans Aalst (former Asse-Lennik), 3-0 (first leg 3-1) to end their international adventure and focus on qualifying to the playoffs in the domestic championship. Latvian Reinis Pekmans topped Lindemans’ scorers with 15 points, while Belgian team had nine aces overall.

SACCH W: And this is high-level tournament? Bolivian side wins ONLY 2 POINTS in one set against Praia Clube!