VakıfBank İstanbul are on top of European Women’s volleyball after four years and for the third time in club history! 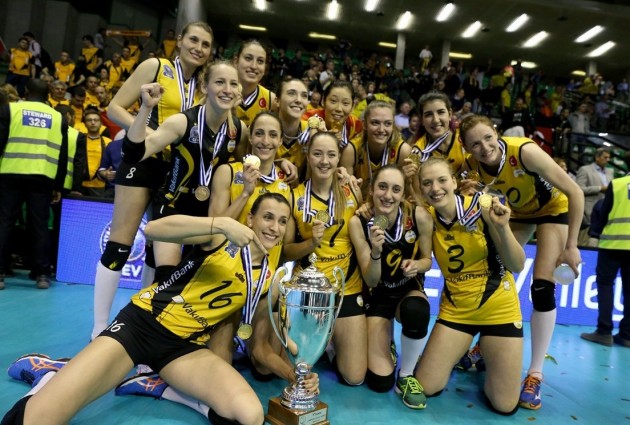 Turkish side VakıfBank established domination in the gold medal game in the Final Four of the 2017 CEV Champions League in Treviso, Italy, against the hosts Imoco Volley Conegliano from the first point to finish it in straight sets 25-19, 25-13, 25-23.

Without Dutch Robin de Kruijf and Mexican Samantha Bricio, Imoco could not do more than to hang on in the first set until the middle of it and in the third set until the very end.

VakıfBank took the first set despite the fact their main attacking power, Chinese Zhu Ting, scored only three points. But, the MVP of the 2016 Rio Olympic Games showed her full potential in the second set, which her team opened with 5-1 and 9-3, and moreover in the third set.

In the set no. 3, exactly Zhu Ting was the one to keep VakıfBank from falling to two-point lead of Imoco, which they had on several occasions. Imoco coach Davide Mazzanti started this part of the game with veteran Carolina Costagrande as opposite instead of unshowy U.S. international Nicole Fawcett. It paid him off, but only until 21-21, when Zhu Ting converted counter attack and American Kimberly Hill made an ace. After that, Imoco players did not have enough strength to fight anymore.

Zhu Ting was the best scorer of the final game with 22 points of which she scored 10 in the third set. Serena Ortolani collected 12 points for the silver medalists.

Drawing of Lots for opening rounds of...