If there is any Women’s volleyball tournament in the world where the Brazilian National Team feels comfortable it is the FIVB World Grand Prix! 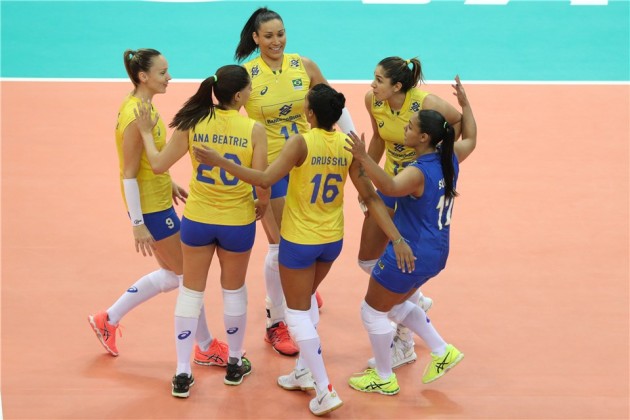 The female “Seleção” won their 12th gold medal in the FIVB World Grand Prix by beating Italy 3-2 (26-24, 17-25, 25-22, 22-25, 15-8) in a highly intense final match in Nanjing, China, (only the second-ever finals of the tournament to be played in five sets, the first one was last year) where the Final Six of the 25th edition of the annual tournament was held. At the same time, the South American giants defended the title.

Both sides committed an uncommon number of errors for a top-class level of volleyball, which can be attributed to the importance of the match but still, it was an unacceptable number, 105 Brazil – 103 Italy! The Italian NT made more unforced errors (31-22), while Brazil dominated in the blocking (15-9).

The Brazilian National Team, who doubled the number of titles they won in the Grand Prix comparing to the closest followers in the medal summary list, the USA, had a very turbulent campaign in the tournament. They booked their berth for both the Final Six and semi-finals only in the last round of the Preliminary Round and pool stage, respectively.

On the other hand, Italy had a magnificent display throughout entire Grand Prix in the last edition of the tournament under this name and format and got themselves a key player for the years to come – Paola Egonu. A high level of play of a prospect opposite was not the news for the volleyball fans around the world but the 2017 Grand Prix was the tournament that threw her into the orbit.

Exactly Egonu pushed the “Azzurre” all the way to the finals, being their best scorer in the gold medal match as well with 29 points. Still, it was not enough for Italy to claim their first-ever title in the tournament. Tandara Caixeta and Natália Pereira stood out in the Brazilian squad in the finals with 22 points each.

FRA W: One of the Peruvian Championship highlights moves to France