Earvin Ngapeth once again divided volleyball fans around the world by making a wrong life decision. His mastery of playing has never been doubtful, but his actions off the court are causing too much suffering to the others. 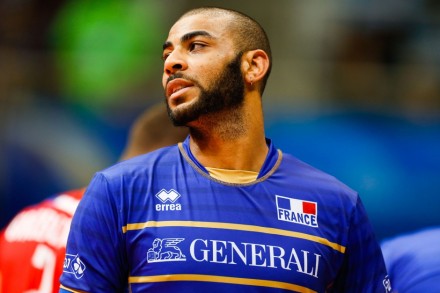 By grabbing three individual awards this year (Best Outside Hitter and MVP of the 2015 FIVB World League and Best Outside Hitter of the 2015 CEV EuroVolley), he gained confirmation of his fantastic form in the 2014/15 season in which he won three trophies (2015 FIVB World League, 2015 CEV EuroVolley – both with the French national team and Italian Cup with DHL Modena).

But, each of Ngapeth‘s gold medals was accompanied by the incident in his personal life, which would be nobody’s concern in case he didn’t cause harm to the others.

Let us get back to even distant past. In 2011, when he was only 20 years old, Ngapeth was excluded from the French national team by the head coach Philippe Blain. Why? He violated the team’s discipline by arguing with Blain.

In 2012, Ngapeth was involved in a fight in the nightclub in Montpellier, France. Because of that, two years later, he was sentenced to three months suspended imprisonment by the Criminal Court of Montpellier.

In January 2014, Earvin left Kuzbass Kemerovo on his own after spending only one month there. By doing that, he ashamed his father Éric Ngapeth, who was a head coach of the Russian side and pissed off the club’s management.

Only two days after winning the trophy in the World League, in July this year, he assaulted a train controller in the French capital Paris and was arrested.

And finally, Ngapeth committed a horrible car accident in Italy, two days ago, when he injured three people and ran away from the scene. Because of that, he was suspended by Modena, the club for which he competes at the moment. Thus, Ngapeth left his teammates, whom he led to winning the Italian Supercup in October, stranded. That is not all. He faces severe punishment for this car accident, which will probably include some kind of imprisonment.

Modena players will have to find their way without Ngapeth for, who knows, how long. Find out what are Modena’s chances without the French outside hitter in the forthcoming period.

Things could not be worse for Modena as they will face two main rivals for the national championship title until the end of the month – Diatec Trentino (November 22) and Cucine Lube Banca Marche Civitanova (November 29), while in the CEV Champions League, Modena will play main contenders for the leadership in their pool – the Polish Lotos Trefl Gdańsk (November 19).

Now, two questions impose as relevant at this point. First: Will Modena really face these challenges with or without Ngapeth? Second: Earvin, when are you going to settle down?

POL M: Lisinac – “We could not block Kurek”

POL M: OMG! Uriarte and Conte could not find the ball after Kurek’s spike (VIDEO)