Germany’s Aurubis HAMBURG – a side debuting this year in the European Cups – has significantly made it to the 1/8 finals of the 2013 CEV Volleyball Challenge Cup and will be playing there Israel’s Hapoel KFAR-SABA to possibly make it among the best eight sides of this competition. This and other volleyball news read on Worldofvolley.com. 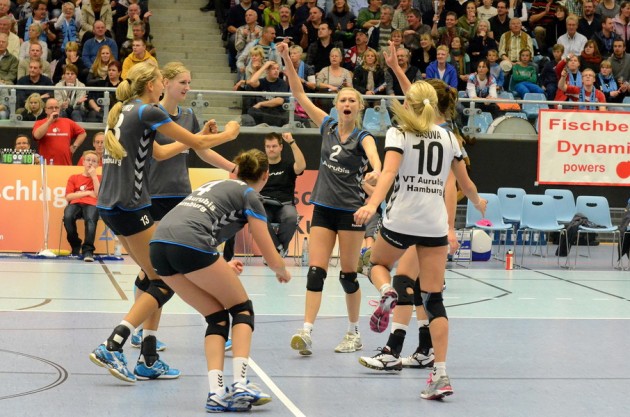 After a series of good performances in the Bundesliga, the group coached by Helmut von Soosten will be trying to seize the night once more by hosting their opponents from Israel on Wednesday.

The Israelis have found their way to Germany on Monday evening and will have a couple of days to adjust to the local conditions after they left Tel Aviv with 19 degrees and temperatures stood at -1 upon their arrival in Hamburg. Hapoel does not really stand out for their physical skills as their players stand – on average – at 175 cm so the team around team captain Imke Wedekind will try to exploit their superiority and height to cruise past this opponent.

Hapoel had made it to the 1/16 finals after another German team, USC MÜNSTER, had decided some weeks ago not to travel to Israel for their return game due to security concerns. In the next round the Israelis downed twice, at home and away, Croatia’s ZOK SPLIT to make it to the round of the best sixteen.

As for Aurubis, the Germans edged twice Slovenia’s Spodnja Savinjska SEMPETER in the second round and then went on to defeat Croatia’s ZOK RIJEKA 3:2 away and 3:0 at home to continue their march in the Challenge Cup. The club is ready for another Volleyball night to be celebrated at CU Arena under the slogan of this European campaign: “CU Arena: Volleyball meets friends!”

TUR W: I want to play in Fenerbahçe for many years