Schweriner SC is the fifth time DVV Cup winner. In Christinen DVV Volleyball Cup final they downed VC Wiesbaden with 3:0 in front of over 10,000 euphoric fans. You can read all relevant news from volleyball world on Worldofvolley.com. 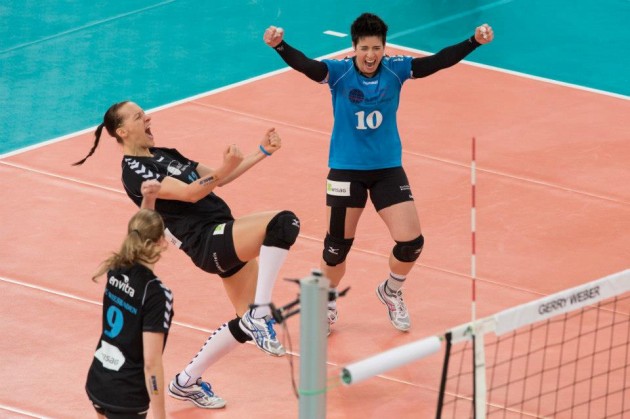 After two long-fought rounds Schwerin was unstoppable in the third set. “We had troubles in the first two sets. In the third set we were able to make it to the lucky little clearer“, said libero Lisa Thomsen.

Both teams started nervously. Schweriner and Wiesbaden offered viewers long rallies, and till the middle of the set the game was perfectly balanced. But in the crunch time of the first round Schweriner moved by powerful attacks claimed it.

Wiesbaden was not impressed by the shaky start and began the second set with even more combative performance than in the beginning. Schwerin didn’t want to be characterized as not cool so they took the fight. Until 16:16 the duelists were on par. In the end Schweriner had more luck andthey dot to lead of 2:0.

In the third set Schwerin played frenzy and quickly which gained them the advance of 10:2. They kept the good performance to gain the third set and claim the Cup title.

“We were a big favorite, but it could still go wrong,” said Schweriner captain Denise Hanke. “But we have stood up to the pressure. This is our great caracteristic.“