Dresden, Germany, January 25, 2012. DRESDNER SC and SCHWERINER SC are ready for what sounds like a “clash of Titans” in the Bundesliga. The players of DRESDNER SC – who, while debuting in Europe’s most elitist competition, recently advanced to the 1/8 finals of the 2012 CEV Volleyball Champions League – are currently ranked second in the standings, with SCHWERINER SC following in third place. 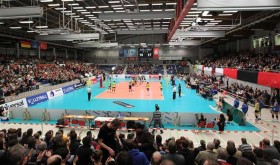 DRESDNER SC claimed the previous match played this past October in straight sets, so SCHWERINER SC will be looking for revenge.

“This match will be tough” says Dutch head coach Teun Buijs who will be able to line-up all of his best players for this clash.

“In my opinion both teams have been improving a lot via their respective matches in the CEV Volleyball Champions League, so I assume we will have a lot of fun out there” adds setter Denise Hanke.

DRESDNER SC head coach Alexander Waibl takes it easy: “This game is not more valuable than any other, because finally the side that takes it won’t necessarily be the national champion at the end of the season. We definitely want to score a win but we shall not forget that my players are really exhausted after the demanding schedule of the past few weeks. We have played many matches without any chance to really recover”.

Although the game with SCHWERINER SC is important, still the club is already fully focused on the 1/8 finals of the 2012 CEV Volleyball Champions League where the team from Dresden will play Russian heavyweight Dinamo KAZAN. The match is scheduled for February 1 and the ticketing campaign has already started.

“We want to celebrate a great Volleyball night at our Margon Arena after we already enjoyed a fantastic atmosphere only one week ago as we played Fenerbahce Universal ISTANBUL” says Managing Director Sandra Zimmermann.

Belgium: Volleyball fever spreading around in Maaseik for a sold-out house

PHOTO OF THE DAY: German joy