The third weekend of the return round of Serie A1 Sustenium brought us one big surprise. Previous leader of the standings, Macerata, lost the match with the 11th team of this championship. 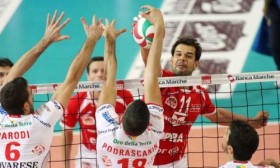 After almost two hours of game the team from Macerata had to recognize the superiority of Copra Elior Piacenza, the team that occupy the 11th place in the classification.

Great performance showed Vladimir Nikolov, that made 16 points in sum, including 6 points in block, 9 in attack (33% of efficiency) and 1 ace, and Samuele Papi with 64% of positive reception, 2 personal aces, 11 efficient attacks (61%) and 2 blocks, awarded the MVP of the game.

From the other side of the net the best was Igor Omrcen with 19 points in sum (17 in attack and 2 personal aces).

According to Jean-Francois Exiga, Macerata didn’t deserve to win: “In the course of the sets we were able to recover 3-4 point of advantage, but we couldn’t exploit them. The match was very important for Piacenza that had to play it at 100%. In classification they have to recover many points for the goal of salvation. Piacenza has very important individuals in the team and frankly I can’t understand what their position in the standings results from.”

The defeat of Macerata and the three-point win of Trento over Padova means that Trento takes the lead in Serie A1 (41 points) with 3 points of advantage over Macerata.

Greece: The 13th round finished with no surprises