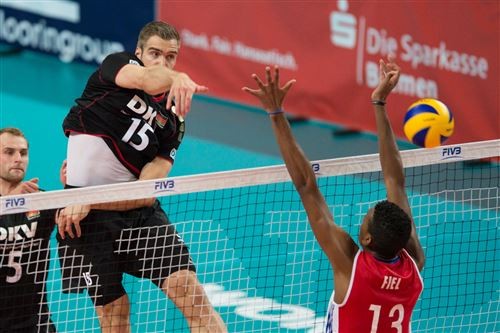 Germany to strong for Cuba in two matches

But the Cubans also learned from their previous defeat, as Rolando Cepeda scored seven points and ensured a balanced result in the first set. In the end of the first set, however, it was the German team who took advantage of the disagreements in the Cuban defense to win 25-23.

In the second heat, Cuba took advantage of unforced errors, but four Geman blocks in a row turned the backlog into a 25-22 win for Germany.

After the second set defeat, Cuba tried to fought back in the third and Cubans MVP Cepeda blocked the straight win for Germany.

Similar to Saturday’s game, the German’s reception was the key to their success and they won a fourth set and embraced victory.

Denis Kalyberda scored 22 for Germany, while Yordan Bisset had 19 points in the Cuban team.

Nearly 2,200 spectators watched the exciting performance. Germany’s win allowed them to climb the ranks to the leading teams Russia and Italy with seven points.

To read more news about this competition click on World League 2013 M.

WCHJ W: Algeria come from behind to outfox Nigeria