In front of 7.137 delighted fans in Berlin’s Max-Schmeling-Halle, Germany proved too strong for Belgium to book their hard-earned ticket for Saturday’s gold medal duel versus Russia. 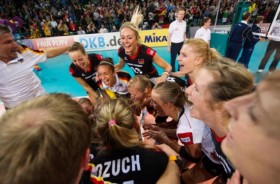 Two sets down, the German ladies made an outstanding comeback to bounce a whole nation in heaven. It was a revival of the 2013 Volleyball European League final where Germany had won 3:2 as well.

The guests from Belgium jumped out for an early 4-1 lead but were quickly caught up by a spirited German team. Captain Margareta Kozuch draw level at 7-7 with a blistering service winner. The Belgians responded with sharp serves on the German passers, mainly on Heike Beier. At the second technical timeout, Belgium led 16-13. At 16-21, Guidetti called his ladies off court to give new instructions. It did not help, Belgium well-deserved 1-0 set lead.

It seemed as Germany felt the pressure on their shoulders in the beginning of tonight’s duel. However, at the first technical break of the second set, the brave German ladies had turned the tables (8-6). Trailing 14-18, Vande Broek asked for a timeout and, two rallies later, sent in Ilka Van de Vyver for serving. It was the turning point of the set. Van de Vyver served eight times in a row to turn the score around again.

The “yellow tigers” opened the gap to two points at 18-16. Germany answered with a three-point run to regain momentum at 19-18. Van Hecke smashed long at 21-23 to offer Germany a two-point lead. Kozuch rapidly took advantage of it by bringing up set point for Germany with a scorching winner from back row. Another spiking mistake by slightly injured Van Hecke brought the hosts back on track.

Belgium quickly regained control of the match in the fourth set, forcing Guidetti to call a timeout at 5-10. Germany gradually reduced the gap. Maren Brinker hammered for a 20-19 German lead but Rousseaux immediately drew level one rally later. Germany kept the upper hand in the deciding moments of the fourth set, moving tonight’s semi-final thriller in the fifth and deciding set.

Belgium led 8-7 at changeover but Germany retook control two rallies later (9-8). It was probably the key moment of the match. The hosts rushed to an amazing finish with a 6-3 run.

Margareta Kozuch was the best scorer of the match with 24 points. Lise Van Hecke booked 21 kills for Belgium.

For more photos from this match click on Galleries.

See profiles of Germany and Belgium.

ECH W: Giovanni Guidetti – “It was victory for supporters”