Munich, Germany, December 2, 2011. After a break of almost four weeks due to the schedule of many national teams that are trying to qualify for the 2012 Olympics in London, Germany’s Generali UNTERHACHING comes out of the gates by scoring an easy win to re-start its domestic season. 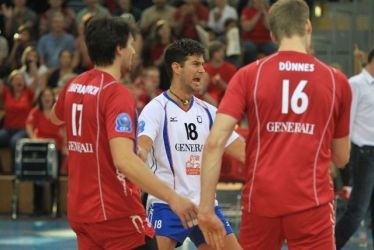 Mihai Paduretu is a man who never seems to be satisfied. However, after the break in the German Bundesliga the coach of Generali UNTERHACHING saw no need to criticize.

Paduretu was referring to last season’s semi-finals when his side was ousted by the team from Germany’s capital city. In front of 3’780 spectators at “Max-Schmeling-Halle” the visitors from Bavaria dominated the hosts from the start, especially with their solid serving and good blocks.

“We caught a day where everything fell into place. It would be nice if we could look that good in the Playoffs for we want to win the championship this time, of course” libero Sebastian Prüsener said after the convincing performance by the three-time and defending German Cup winner that will meet BERLIN again this coming December 10 for the quarterfinals of the German Cup.