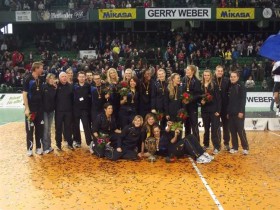 The atmosphere was just amazing for what has gradually turned into a real Volleyball festival there in Germany with some 600 fans all perfectly dressed in yellow cheering on the players of SCHWERINER SC from the start up to the end of the match.
Two players, Patricia Thormann and team captain Julia Retzlaff, had already enjoyed this unique experience in the past since the “Gerry Weber Stadion” has been the venue of the finals since 2005, but it was an extraordinary moment for these ladies as well. Right by the start of the warm-up, the players mentored by head coach Teun Buijs were just amazed by the fans that had traveled some 400 km to make it to Halle.

SCHWERINER SC quite easily controlled the match in the first and second sets, with a good reception and defense helping setter Denise Hanke go for many different options in attack.

Rote Raben VILSBIBURG bounced back in set 3 as the game got tighter before some great rallies followed in the fourth set. SCHWERINER SC, however, was well supported by spiker Thormann, played calmly and could eventually celebrate its triumph together with the fans. Head coach Teun Buijs was just speechless: “It is my first season with the club and we have already seized one trophy. That’s fantastic. And the atmosphere here, I do not know what I shall say, just superb!”

The awards ceremony was held only after the men’s final where VfB FRIEDRICHSHAFEN downed Generali UNTERHACHING in straight sets (25-23, 25-20, 25-20) to stop a positive series for the side from Bavaria that had claimed the last three editions of the national cup as well as the last two clashes in the Bundesliga.

MVP of the final was voted Anne Buijs, the daughter of head coach Teun, with the trophy for the winning team being presented by Erwin Sellering, the Minister-President of the Federal State of Mecklenburg-Vorpommern, whose capital city is Schwerin.