Getting to know: Felix Koslowski the youngest head coach in CL

Though his team did not win a single game in the prelims of the 2014 CEV DenizBank Volleyball Champions League, the mentor of Germany’s champions SCHWERINER SC Felix Koslowski has nevertheless a story to tell. At 29 years of age, he was by far the youngest head coach starring in Europe’s elite club competition, and even though his debut was not that successful, there are many positives that he can take from this adventure. 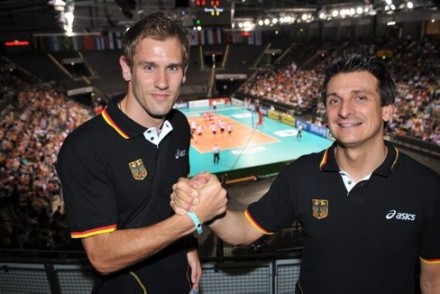 “Of course it was a big honour for me and for my team to participate in the CEV DenizBank Volleyball Champions League this year” says Koslowski, who was born in Schwerin and returned to his home town this year after spending three seasons at the helm of another team competing in Germany’s Bundesliga, VfB 91 SUHL.

“Almost all of my players debuted this year in this competition and every single set we played does really count because you get to play the best teams in Europe and so you can develop both individually and as a team as well. I hope we will be able to profit from this experience later this season as we enter the final stage of our national league.”

Though still very young, Koslowski is already a pretty familiar face for many Volleyball fans, especially in his native country for he has been working together with the head coach of Germany women’s national team, Italian-born Giovanni Guidetti, for some years already. And Guidetti is probably the best mentor anyone may want to get.

“We have been working together in the national team since 2006. If I had to start jotting down what I have learned from Gio as he is nicknamed, I could probably write a book” Felix reveals. “Of course I got to learn many things about tactics, technical skills, etc. However, most of all, it is amazing to see how he develops the right chemistry within his teams. Incredibly this does not respond to a predefined plan but he is driven by an incredible love and passion for this sport. He also shows a unique will to improve and to make his players become better as well.”

How could Felix motivate his colleagues who would like to embark on a similar adventure?

“When you are a young coach, the most important thing in my opinion is that you work closely with two or three elite coaches and that you try to take everything you can from them. After this process is complete, you can start work on and build up your own coaching philosophy. Of course you always have to be a little lucky because young coaches need most of all to be given an opportunity. But if you get that chance, you shall work hard every single day. Don’t be happy with being good; you shall always try to be the best.”

Being so young, does this facilitate Felix’s interaction with the players or does it sometimes create additional barriers? How does a 29-year old coach impose his authority, so to speak, on players who may be his peers?

“This is my fourth year working as a head coach in the first division here in Germany. Finally this year I have no players that are older than me. But I remember very well my first year as a coach. I was 26 and 10 players of my team were older than me. I spent the first few weeks trying to convince them that I was ready to coach at this level. Even though at that time it was not that easy, if I look back now, I think it was a great challenge. However, I think that the players do not care that much about the age of their coach; the starting point is that they feel respected, understand that you want them to improve and you show that they can always learn something from you as their coach.”

His team’s campaign in this year’s CEV DenizBank Volleyball Champions League was side-lined by injuries. One of SCHWERINER SC best players, Saskia Hippe, will be out for the remainder of the season.

Is there still enough time to accomplish the goal to retain the title SCHWERINER SC won in the Bundesliga last year so as to qualify for the next edition of the Champions League? 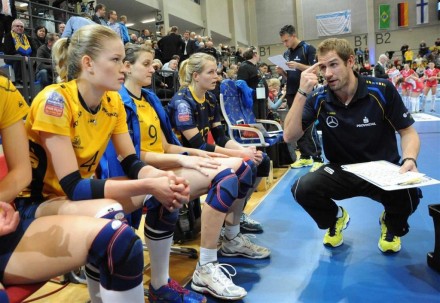 “We really suffered of bad luck and we are still struggling with injuries. This impacts on the team more than on Saskia or Anja Brandt personally. However, we are confident that they both will return to competitive Volleyball very soon. On the other hand, this is sport and this situation does offer a range of opportunities for younger players. The goal remains the one we have set at the beginning of the season; for sure this is not going to be that easy but we will keep on fighting as hard as we can until the end.”

Koslowski spent some time in Italy before returning back to Germany. This country used to be a real Volleyball “Mecca” especially by the time he was there.

Was it somehow difficult for a young German guy to adjust to the sometimes very peculiar Italian way of doing and managing things?

“Italy was a dream that came true for me and in the end also a great experience. I was really lucky to get this opportunity to spend one year in Chieri and another one in Bergamo where I worked with Lorenzo Micelli who is currently coaching Eczacibasi VitrA ISTANBUL. Italy was much different than what I was used to in Germany. The level of the national league was much higher and clubs were managed in a totally different way. However, I think that the most important lesson I could take there was to see how coaches were able to manage all the big stars that were included on their team.”

Finally, which are the goals that Felix has set for the remainder of the season? And if asked to make a prediction, which team will win this year’s Champions League?

“The goal is to get the right to play in the Champions League also next year. We need to work hard to achieve this goal and first of all we need to get a good position for the start of the Playoffs in the Bundesliga. As for the Champions League, well, this is an easy question for me. VakifBank will win! They have great players, a great coach, and a great staff around the team. I will keep my fingers crossed for them.”