Two months ago, the Serbian Mirjana Djuric - who prefers to be called "Mira" started playing for Rote Raben. 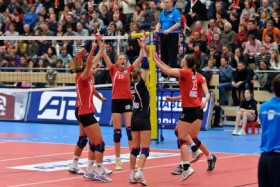 She is 1.84 meter tall, confident and free-spirited young woman with a lot of experience.
She was born on February 1986. in Belgrade. At the age of 14, she went along with her older sister for one year to Belgrade to play for Volleyball Club Postar, where they both played for three years in the league. Then she was sold to another Belgrade club, after which she was playing against her sister.

From Belgrade Mira Djuric went to Oregon in America, where she was playing for the University-Volleyball Team.

She had little luck with the new team, which lost in the first year, 19 of 20 games. This was a really bad experience for her. However, the team improved in the second year and even won half the games. Then it was time for a change and the next three years she spent in Florida. She was also studying anthropology and after getitng the degree, she returned to Europe.

– It was a bittersweet farewell. However, in my heart I am European. That is why I never wanted to stay there. On the other hand, I have a lot of dear friends there I like to visit again.

In December last year, the spiker was playing with her team Khimik Yuzhny from Ukraine in the first round of the European Cup in Vilsbiburg. The spectators and officials of Rote Raben were impressed and she was also impressed with Raben.
Since the middle of January, Mira Djuric wears the jersey of Rote Raben with the number 15 and is “very happy” about it.

According to her, the beginning was difficult until she got used to the rules of the team. Now the Serbian player has found her place in the team.
– When I am on the court, I always give 100 % and believe firmly in victory until the last point. If we lose it is like a shock for me. Our motto is “Do not play to lose, but  play to win. If you are afraid to lose, you will never win.”

POL M: Schedule of semifinals of Polish League for men