Derby between Schweriner and Dresdner was one of the unluckiest one in the recent past. 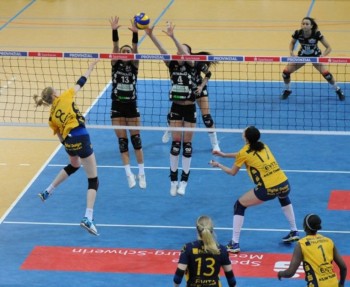 Three players suffered injuries, and two of them might have ended season. At the end of the second set Katharina Schwabe injured right thumb, and had to leave the court. But, it was only the beginning of this nightmare derby.

In the middle of the third set Danica Radenković renewed leg injury and jeperdized the rest of the season. The most severe injury happened in fourth set when Rebecca Perry had a bad landing after an attack an torned ACL. She was even not suposed to play, but entered the court because of the Schwabe’s injury.

We hope that all three players will have a speedy and successful recovery.