With both teams having already qualified for the final round of the 2012 CEV Junior Volleyball European Championship scheduled for August 18-26 in Ankara, Turkey, the home heroines of Belgium and their opponents from Germany were supposed to battle it out for first place in their third-round qualifier on Sunday. 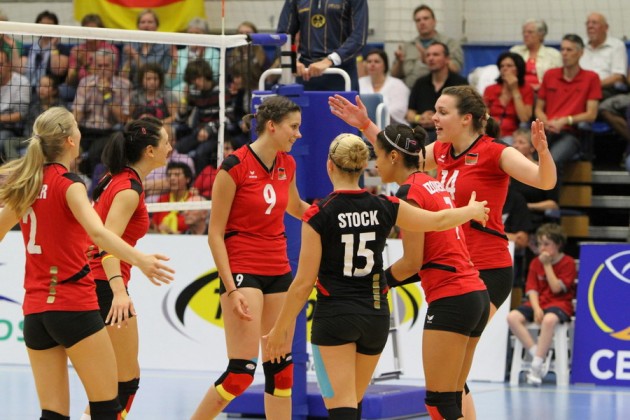 Germany eventually showed more quality and determination to score a third consecutive win in straight sets (25-13, 25-21, and 25-18) there at “EuroVolley Center” in Vilvoorde and complete an impeccable run waiting now for the results of the Drawing of Lots coming up on Monday morning in Turkey’s capital city.
The match got started with the great blocks killed by Linde Hervent for Belgium and some superb actions in defense for Germany. However, the fans that had filled up to full capacity the stands of the “EuroVolley Center” quickly realized that Germany had scouted pretty well the weaknesses of their heroines. Germany’s block was always well positioned and Belgium’s top scorers could not finish off their actions as they had done in their previous matches with Romania and Austria. Germany quickly cruised to the final 25-13 well supported by opposite Carina Aulenbrock and wing spiker Lisa Izquierdo, a player with great potential who has got Cuban blood and roots.
The same story unfolded in the second set where Belgium woke up very late to save six set balls and make the score less embarrassing in the end (25-21). The home side finally got into the game in set 3 after Nathalie Lemmens, Brenda Taga, Lize Van Cleemputte, Sofie Hawinkel and Karolina Goliat had composed a completely revisited starting six to go to the front (11:3). However, once again powered by Aulenbrock and Izquierdo, Germany stormed back to draw level at 14 all and some more errors by the home girls helped the guests finish the tournament with an immaculate record of 9 sets won and no set conceded to their opponents.

In the other match of the day it was more a question of pride for Romania and Austria that were anyway no longer in contention for making it to the final round of the Championship. Romania eventually edged Austria 3:1 (19-25, 25-16, 25-20, and 25-22). Austria stormed back in the first set after trailing there 7:13 by scoring eleven consecutive points as Katrin Nussmüller was standing beyond the serving line; the Austrians eventually celebrated their first set won in Vilvoorde but this was not enough to make Romania lose composure. The group eventually displayed its best play since the start of the tournament with Cristina Cazacu, Iuliana Matache, Diana–Dora Carbuneanu and Andra Lidia Stresina attacking and blocking with good consistency to contribute the first win in the Pool and settling finally for third in the event.

ITA M: Milushev ready to hit it hard for Sora