EXCLUSIVE: Heynen for WoV – “When teams have chance to choose, they will choose”

Vital Heynen gave an exclusive interview for WorldofVolley in which he spoke about the previous EuroVolley. 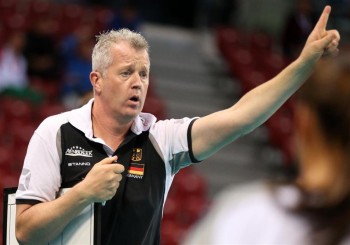 Germany failed to seize a medal at 2015 Men’s European Championship. They got eliminated in the quarterfinals after a defeat against Bulgaria, and therefore returned home empty-handed. On top of that, they got accused for losing the game against Netherlands in the first stage on purpose…

Vital Heynen, head coach of Germany, accepted to talk about all those things for WorldofVolley.

How would you rate the final ranking of Germany at 2015 Men’s European Championship?

“If you just look at the ranking there is not so much to say. It’s not good. Actually it’s absolutely bad. We got eliminated in quarterfinals, together with Serbia, Russia and Poland. I think it is the most impressive group of quarterfinal losers I have ever heard of. We are not happy, but then you ask yourselves who will be happy with their ranking. Of course – France, fantastic result. Slovenia, amazing. And then? Maybe Italy show some happiness, but if you lose the semifinal against Slovenia you can’t be too happy. Bulgaria made a fantastic achievement by reaching the semis, but they again finished at the fourth place. So, only a couple of teams are happy at the end, and we are not one of them. We are very disappointed.”

What did your team lack in the quarterfinals game against Bulgaria?

“I do not know. We were simply not good enough. Sport is also a mental game and I saw an amazing fighting spirit in the eyes of Bulgarian players. Maybe we were not sharp enough. We came to play nice volleyball, but at this kind of tournaments it is not enough. You also have to fight like hell. Maybe the crowd made us play that way, maybe the opponent was the reason… Anyway we failed to reach our level.”

What is your comment about accusations that Germany lost the game against Netherlands on purpose?

“We did not lose the game on purpose. Absolutely not! But, it is clear that I chose to play with totally different team because of the system. The system at European Championship makes no difference between the second and the third place. So, why should I make my guys tired and pushed them play another game, when winning or losing have no value? Therefore, when we were playing with the second team and the Netherlands with the first, it was normal that they would win. Still, it was a very close game.” 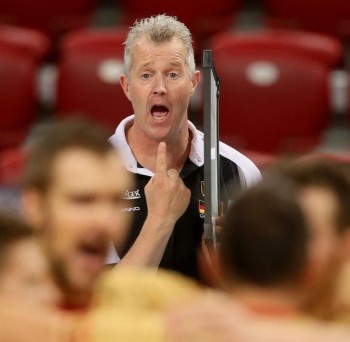 Plamen Konstantinov and Gido Vermuelen directly accused your team for choosing “the easiest” path in the bracket. Have you talked with them about that?

“Of course I was thinking about the easiest path. It is happening at every tournament. When teams have the chance to choose they will choose. It would be stupid not to think about choosing. So I chose to play against the second team knowing that there was a chance to play against Bulgaria again. One of the basis of my job as a coach is to take care of my team and my obligation is to take my team as far as possible at tournament. And my team played good against the Netherlands. We did not lose that game on purpose because then it would be 3-0 and we would just give away points to the rival. It was 3-2 and 15:13 in the tie break! I would like to see someone who wants to lose, to play that kind of game. It not something that you plan.”

Now, when the EuroVolley is over, do you think that you should have done some things differently during the tournament?

“If you do not win the tournament then you will always find some things that you should have done better. Everyone who know me are well aware that I always do my best for the team, even if it is not the best for me. I knew that there would be critics for playing against the Netherlands with the second team. But, I take critics with pleasure if I think they would help my players. My job is not to make myself look god, my job is to make my team look good.”

ECH M: Konstantinov – “They killed us with service”

ECH M: Giannelli – “It was like the final for us”

Germany: No chance against Moers

#IAMINBERLIN: Holmes for WoV – “Advancing into...