Olympiacos O.S. Piraeus were seen as favorites, not only in semifianals of the playoffs, but to win the title in Greece. Unfortunately for them, they bumped into extremely ready P.A.O.K. Thessaloniki! 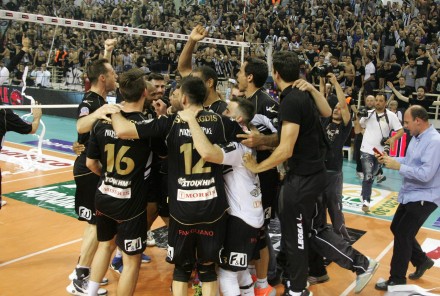 Olympiacos beat PAOK in four out of four games before playoff semis, but PAOK took revenge just in time. Firstly, the reigning champions downed Olympiacos twice on road, lost the third game at home court, but with the help of the Cuban „from another planet“ Rolando Cepeda, PAOK prevailed in Game 4, 3-1 (22-25, 25-23, 25-22, 25-18) and got the qualification for the finals by winninig series 3-1.

This is the first time that Olympiacos will not be able to fight for the championship trophy since 2012, but they already had a great year by gaining League Cup and national Cup.

Cepeda scored 29 points in PAOK. The Slovakian František Ogurčák had 15 in Olympiacos.

In the finals, PAOK will meet A.O.Foinikas Syros who eliminated A.O. Kifissia (3-1 in series).

ARG M: Uchikov leaves UPCN and moves back to Europe?