Crazy Diamond Segrate: A great team performance with excellent serving (9 aces) and superb work at the net (21 blocks) meant Segrate had the better of Loreto 3-1 in the A2 Cup quarter-finals. 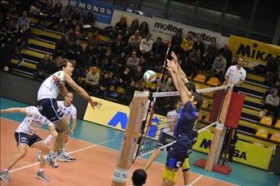 Segrate in A2 cup Final Four

The club will take on Molfetta in the semi-finals to take place on March 3.

“This is one of the best games I’ve coached in my carrier – said Daniele Ricci – There were boys born 1990 and 1991 on court that really thrilled me. It’s tough for a young group to recover from a difficult period, which makes my satisfaction almost greater than if we’d won a title”.

Italy: Castellana defeats Sora and goes to the semis