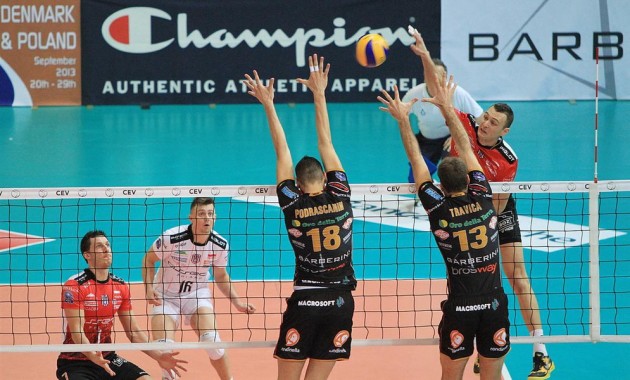 In the next round (and similarly to the Playoffs 12 of the previous edition) there will be an Italian derby as MACERATA takes there on the likes of Bre Banca Lannutti CUNEO.

The first set was dominated by the Italian team up to 20:15 with some great serving (1 ace) and blocking (4), before Resovia stormed back powered by the attacks killed by their opposite Zbigniew Bartman who was back in action after some weeks due to injury. The score stood at 20:19 after the Polish middle-blocker Piotr Nowakowski stopped an attack by Italian star Ivan Zaytsev. After that local mentor Alberto Giuliani asked for a time-out and when the teams went back to the court the Italian champions finally secured the first set by blocking their opponents’ captain Aleh Akhrem for another mini-break (23:20). Simone Parodi eventually contributed the final 25-23.

It seemed there wasn’t any chance at all for Asseco Resovia RZESZOW to re-open the quest for the Playoffs 6 after the second set as Lube Banca Marche MACERATA started displaying perfect Volleyball in all fundamentals. The Italians moved up to 21:12 and then clipped the set with the score of 25-18, with a terrific 68% of efficiency in attack, with their pace-makers being Serbian middle blockers Marko Podrascanin and Dragan Stankovic who scored 4 points apiece.

However, after the hosts found again the right rhythm and claimed a reassuring margin at 21:17, the match was again in balance as the Polish team scored the next six rallies and went to the front with the score of 23:21, and then completely re-opened the fate of the game claiming that set (25-23) with a block by Nikola Kovacevic.

Still it was just a flame as the fourth set was totally dominated by Lube Banca Marche that finished it off with a speedy and quite impressive 25-14. Spiker Ivan Zaytsev was the top scorer of the match with 18 points, while Bartman registered 17 for Resovia.

“We are very happy with our qualification for the Playoffs 6” said head coach Alberto Giuliani “but not with our performance tonight. We could close the match in the third set but we didn’t, maybe because we thought that we already got the victory. We must learn to be concentrated all the way through if we want to get good results in the next round of the competition where we’ll play against a very strong and well-known team such as CUNEO. In any case, we and our fans are all very happy tonight”.

On the opposite side, Polish coach Andrzej Kowal said that “MACERATA is stronger than us, they have a lot of Volleyball stars and good attackers like Simone Parodi, Dick Kooy and Ivan Zaytsev. We already knew that it wasn’t easy to play here in Italy and win against Lube Banca Marche, but in any case we are happy first because we know that we did our best, and secondly because an important player such as Bartman is back in action after missing some matches because of an injury. I think we can look pretty confidently forward to the remainder of the season”.

ITA M: Edgar man of the match vs Verona

BRA W: Thais Souza – best player of this round

EXCLUSIVE: Tsvetan Sokolov – “I am still...