This coming Tuesday, February 5, Italy’s rookie Unendo Yamamay BUSTO ARSIZIO will be playing Azerrail BAKU for the first round of action in the Playoffs 6 of the 2013 CEV Volleyball Champions League – Women. This and other volleyball news read on Worldofvolley.com. 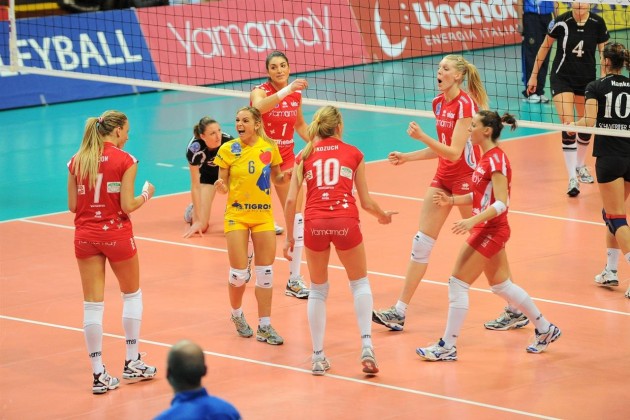 Head coach Carlo Parisi will be missing setter Carli Lloyd – due to injury – and most probably will have to opt for a starting six including Valeria Caracuta and Margareta Kozuch as setter and opposite, middle blockers Christina Bauer and Valentina Arrighetti, plus outside hitters Juliann Faucette and Francesca Marcon, with regular libero Giulia Leonardi completing the line-up. Maren Brinker will be ready to join the game if necessary as she has done in all previous fixtures. In order to prepare for this much anticipated clash with Azerrail, Unendo Yamamay recently played a friendly match with the hosts of this year’s final four, Galatasaray Daikin ISTANBUL, losing 2:3 but showing a good performance.

Azerrail’s roster includes many players who previously competed in Italy’s national league, namely Sara Anzanello and Megan Hodge (who starred for MC-Carnaghi VILLA CORTESE), Manon Flier (who played for Vini Monteschiavo JESI, Asystel NOVARA and Scavolini PESARO), Lithuania’s Indre Sorokaite (a former player of Duck Farm CHIERI TORINO), and libero Luna Veronica Carocci, who spent the 2010/2011 season in Busto Arsizio. 3’000 fans will be filling up the stands of the PalaYamamay for this game whereby the hosts hope to get the right edge before the return match coming up a week later in Azerbaijan.

“We have been scouting our opponents via some video material and I have to say that Azerrail is a great team, with very experienced players included in their roster” says Francesca Marcon. “We know them very well but we also shall not underestimate some youngsters that are also part of their group. However, we believe in our chances and we want to leave a good impression since this is our last home match of the season in the European Cups”.