ITA M: Macerata is second after 3-1 victory over Cuneo

Macerata secured second place with a game in hand thanks to a 3-1 victory over Cuneo in front of yet another sold-out crowd. This means they will begin the quarter-final series with a 1-0 advantage, and so will they in the semis if they qualify. Read latest volleyball news on Worldofvolley.com. 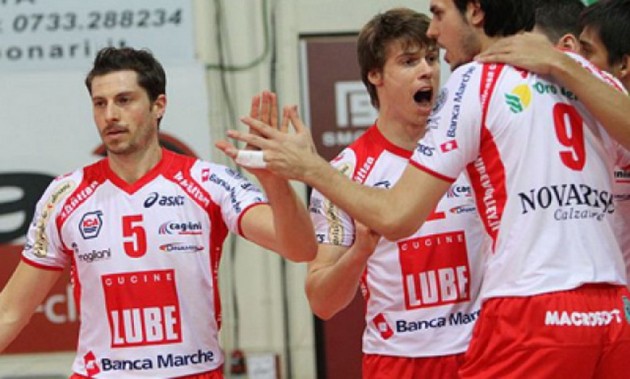 More good news for Macerata as Jiri Kovar made his comeback five months after his knee injury. Cuneo was without Ngapeth, who got injured the day before, while Macerata rested Parodi because of abdominal pain.

Alberto Giuliani (Coach Cucine Lube Banca Marche): “Intense and nervous game, we wanted the end the regular season at home by sealing second place and we did it. This will give us a good advantage in the playoffs, and also a 90% chance to take part in the Champions League next season, this is therefore an important achievement. We are also very happy with the superb return from Jiri Kovar, who trained a lot at badminton and had a few sessions with the team. What we’ve seen of him is enough to understand the kind of talent we have been missing during the season”.

Wout Wijsmans (Bre Banca Lannutti Cuneo): “Macerata has been more consistent than us during the game, this was the key to their victory. Let’s not blow this loss out of proportion, our goal is now to finish the regular season with a win, and then get ready for the Champions League Final Four and the playoffs”.

POL M: Milosz Zniszczol – “We are happy with this round”