Italy: Trentino beats Macerata and creates gap at the top

Trentino won the big game of the weekend by sweeping Macerata in its packed Fontescodella arena. Not only Trentino brutally stopped Macerata’s run of 11 straight victories between the league and European cup but it also created a gap at the top of the league (+6). Juantorena MVP. 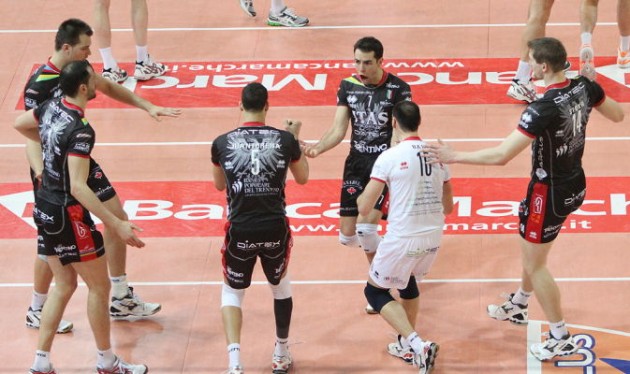 Alberto Giuliani (coach Lube Banca Marche Macerata): “I am obviously disappointed with the defeat, for the fans that filled the gym and for the situation in the league table, given that the top spot is now really far away. But we’ll all remain confident. Today, Trento taught us how important are details, especially at the end of sets. That’s precisely on those details that we’ll have to work. We know we don’t have much time to train, we’ll just have to learn while we’ll be playing. Obviously in the second sets we made huge mistakes, because at 24-21 with the ball in hand, we should really finish them off. But I strongly believe in my team, they have undeniable potential, which they have already shown in part, and I am certain you’ll see great things from them in the future”.

Radostin Stoytchev (coach Itas Diatec Trentino): “Important victory but we have to keep our feet on the ground. We are obviously delighted with this result, we showed great character when the situation became difficult for us. Burgsthaler’s entry was crucial, we stepped up at the net and this proved key”.