Out of the 14 players who are set to represent Italy at the upcoming VELUX EuroVolley, eight will be celebrating their continental debut. 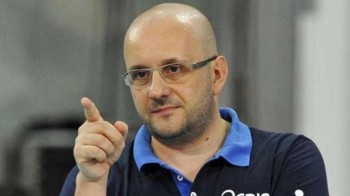 On Saturday, as he announced the list of those retained for the European Championship scheduled for September 20-29 in Denmark and Poland, Italy’s head coach Mauro Berruto confirmed his intention to work on a long-term project whose primary goal is to perform well at the 2016 Olympics in Rio de Janeiro. Still Italy will try to stretch their impressive streak also in Denmark to follow up on the silver medal they claimed two years ago in Vienna and the bronze they won at the 2012 London Olympics and at this year’s World League Finals.

“We have completed the second stage of our preparations and I am very happy for we did achieve the goals I had set” Berruto says. “I have to thank all the 15 players who have been working very hard as they all wanted to get a spot in the group traveling to Denmark. In the end Giulio Sabbi was the last one to leave the team after he had re-joined us in August for he had delivered a terrific performance at the Mediterranean Games in Turkey” he continues. “He remains part of this group and I did thank him for the professionalism and dedication he has been showing throughout the past weeks. Surely he will come back for future tournaments and competitions. He was the one to be dropped from the list for when it comes to his position we already have a good set of players. I have always made it clear to my players that we have to be flexible and ready to adjust to different situations similarly to what we did in the bronze medal game of the World League Finals in Argentina where Ivan (Zaytsev) eventually played as outside spiker and Luca Vettori took over the role of diagonal player”.

Salvatore Rossini, Davide Saitta, Filippo Lanza, Luca Vettori, Jiri Kovar, Thomas Beretta, Matteo Piano, and Daniele Mazzone are the eight players who will be debuting at the European Championship. Cristian Savani is the most experienced in the group and in Denmark will make his fifth appearance at the European Championship. The coaching staff around Mauro Berruto includes Andrea Brogioni and former international star and Volleyball Hall of Fame inductee Andrea Giani.

On Monday and Tuesday, after flying to Leipzig, Italy will play two friendly matches in Dessau with Germany, another team set to compete at the upcoming EuroVolley. Italy and Germany will cross once more their ways after they have done so in the prelims of the World League with the “Azzurri” winning 3:0 and 3:2. On Wednesday the group will travel to Odense where on Friday it will debut in prelim Pool A by taking on hosts Denmark.