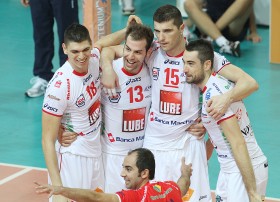 Jiri Kovar (Lube Banca Marche Macerata): “The Italian Cup represents an extremely important trophy, all the teams will give their maximum to get this first trophy of the season. Us included, obviously. We have not had a positive run of late, but we have always managed to find our best in the in-or-out situations. We’re hoping to do well again in Roma. Modena is a tough opponent, especially on a knock-out game. They have similar characteristics to ours, I think that to beat them we’ll need first of all to put pressure on them with our serve. We really want to do well in this competition, we will give it our best shot for the club and the fans”.

Daniele Bagnoli (coach Casa Modena): “These are really special moments, different games from the others. The moment of form as well as the capacity to adapt to the pressure and the arena can make the difference. In that respect, Macerata certainly has more experience than us. It’s true that neither of us are going through a positive period, we have both lost a few games of late. Macerata is a top quality team, they put you under pressure with their serve and consequently at the net. We’ll have to do well to contain them and be aggressive ourselves. Macerata is definitely the favourite, but we have to focus on our game, we proved that when we played at our best we could give a game to anyone”.

Macerata in the cup:

Modena in the cup:

ITA: Evan Patak, the outside hitter… “Born in the USA”