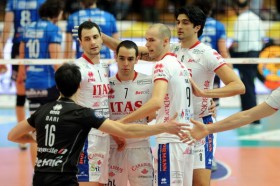 Matey Kaziyski (Itas Diatec Trentino): “The only fact to be facing this club, which in the past has often knocked us out of the Italian Cup represents for us a good reason not to underestimate them. Belluno knocked out the holders, Cuneo, and they will try to make it hard for us too. They have improved a lot lately. It will be up to us to overcome this obstacle”.

Roberto Piazza (coach Sisley Belluno): “We’ve come to this event in excellent form, the team is starting to realize what is its potential and that’s very important. Trento is a team built to win in Italy, Europe and in the World, we all know that. This is one of the strongest teams in the world, but they are not unbeatable, even if it’s true they very rarely lose. This season, they have lost against Macerata and Latina, and one game in the Champions League, they must have a couple of weaknesses, although they have many more qualities than weaknesses. If we can stay close from first to last point like in last December in Belluno, and if we don’t make the silly mistake we’d made that day, we could have a go. We’ll need the perfect game, without ever giving up. We have to do well to receive their serve, that’s where they build their advantages and when they’re ahead you never see them again”.