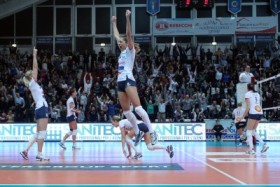 In PalaFranzanti Piacenza celebrated the first historical qualification to the semifinals of the championship by exceeding Liu Jo Volley Modena in the tie-break.

It won the first set quite easily. Thanks to a great defense of Cuccarini it got to 16:11 until the second technical timeout, before closing the set with 17:25.

In the second set Piacenza after a difficult start again exceeded the opposing block and took the advantage thanks to great Nicolini (16:13).

The third set was very balanced. On one side Turlea showed an excellent performance for Piacenza and on the other, Harmotto and Aguero for Modena.

In the final part, decisive for the extension of result was Pachale, thus leading Piacenza to the score of 25:22.

In the fourth set Modena dominated from the start and did not allow the hosts lower the difference, closing the set with 13:25.

The fifth set was tense for both teams, thus ending in favor of Piacenza 15:13, that qualified for the semifinals where its opponent will be Yamamay Busto Arsizio.