Zaytsev and co offered a top class performance against Monza to make sure Roma will stay up and qualify for the playoffs at the same time. As for Monza, this is a sixth consecutive defeat as the Gabana family announced this week it would not be involved in volleyball anymore from next season. 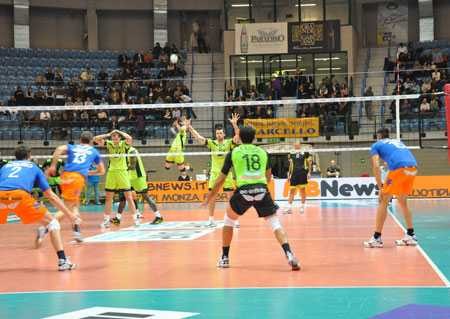 Gabriele Maruotti (M.Roma Volley): “I have only got back in training four days ago, and I should not even have played. Fortunately, even if it still hurt, my ankle was fine, and the adrenaline did the rest. We really needed a game like this. We had been working very hard in the gym but the results were not going our way. I can finally say that the hard work has paid off. Our target was to secure safety before the last game against Padova. We did it and now we’ll be able to play the last few games with less pressure on”

Emanuele Zanini (Acqua Paradiso Monza Brianza): “The news that Giulia Gabana was going to leave volleyball caught us by surprise and it was not easy to get on court with motivation. We tried to give everything we had. The European Cup exit probably had an influence too. We played well for three sets, then we lost our way in the fourth”.