For the first time in history Copra Elior Piacenza is the winner of Italian Cup! 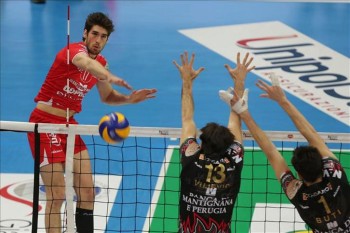 Easier than expected, Piacenza has beaten Perugia 3-0 (28-26, 25-21, 25-19) and collected the big prize. The first set decided many things in this match, and Reds have won it thanks to the video challenge!

At the result of 26-26, referees called Papi’s spike an out, but after reviewing the play they saw that Perugia’s block touched the net! Like that was not enough, in the next point Simon’s serve was firstly called an out (again), but video replay clearly determined that it was an ace!

Ace for the set of Piacenza, ace for big psychological advantage. The ace which opened the way to the trophy.

IRN M: Matin Varamin one step away from title