Macerata defeated Verona 3-1 in the first quarter-final encounter. Giuliani’s team will watch on tomorrow as Verona takes on Monza, while it will be back on court Monday to try to qualify for the semi-finals against Monza. Savani finished top scorer with 21 points (58% in attack) and MVP of the game. 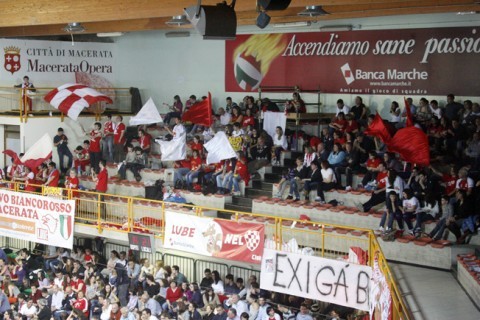 Alberto Giuliani (coach Lube Banca Marche Macerata): “Our attitude was not good, maybe even predictable given this formula in which nobody can afford to miss a thing. We paid the price for our early hesitations, but Igor’s run of serves had already helped us to launch a comeback in the first set. You could see how much we wanted this win. This is an extremely important win for us, and now we’ll focus on what will be the key game against Monza on Monday. Zanini’s team offers some very interesting tactical schemes, we’ll have to be prepared”.

Bruno Bagnoli (coach Marmi Lanza Verona): “Despite the fact we had a couple of players not hundred percent fit, I am extremely satisfied with the way the team played. In the first set, we served like a top level team, while in the fourth it was their serve that made it hard for us. This means the difference between the two teams was what happened in the middle. In my opinion, with both teams serving normally, the difference was their more effective attack”.

Facundo Conte (Acqua Paradiso Monza Brianza): “We have no choice but take a three-point win to have a chance to qualify on Monday against Macerata. It won’t be easy by any means, Verona proved they could play excellent volleyball against Macerata. They served very well. We’ll need our best game to win it, it will be tough but we’re confident”.

*one game in hand

PHOTO OF THE DAY: Giannellimania in Monza