No surprises on Easter day. Just like in the regular season final round, Roma defeated San Giustino 3-2 and will face Trentino tomorrow with all its chances of qualifications for the semis intact. 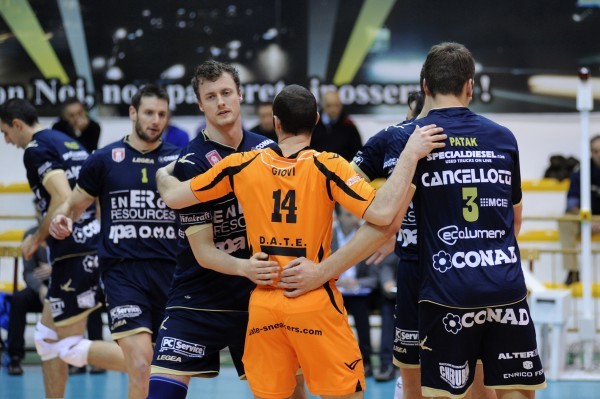 Henk Jan Held (coach Energy Resources San Giustino): “Shame because this team deserved more than that. We had the game in hands in various moments but then we ruined it with silly mistakes. We had a poor start to the tie-break which followed the bad end of fourth set. Roma served better and we struggled”.

Gabriele Maruotti (M. Roma Volley): “We knew it was going to be a difficult game because San Giustino had little to lose, we know they hit it with arms loose. We have been inaccurate in some situations but we managed to get back on track in the fourth, when it mattered most. We’re facing a very tough game tomorrow against Trentino, we know it but we’ll try our best”.

Matey Kaziyski (Itas Diatec Trentino): “We only did 50% of our homework on Saturday by beating San Giustino. We’ll need to complete it with another victory tomorrow against Roma. It won’t be an easy game but we had one more day to prepare compared to our opponents. We’ll try to take advantage of this by putting maximum determination on court: we really want to go to the semi-finals”.