CMC RAVENNA won a dramatic five-setter (25-23, 25-22, 18-25, 23-25, 16-14) with Bre Banca Lannutti CUNEO to complete a clean sweep of their matches in the Playoffs of the Italian national league where a spot to participate in the 2015 CEV Volleyball Challenge Cup was at stake. This means RAVENNA will be back in action in the European Cups for the first time in 17 years! 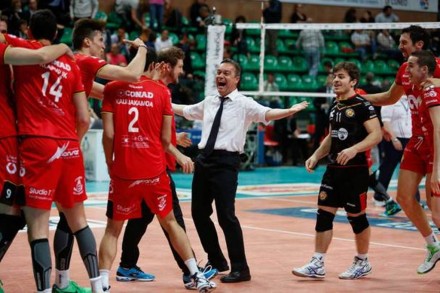 This was the long-term goal set by the local management but it was achieved two years ahead of their plans. Though the players have to be given much credit for this, there is a man who also heavily contributed to that success story: Marco Bonitta.

The Italian head coach who was at the helm of the women’s national team when they won gold at the 2002 World Championship in Germany seems to have some special connection with that kind of sensations. Two years ago he steered Italy’s U20 men’s national team to a European title in Gdynia, Poland and now is about to embark on another adventure, leading the women’s senior squad at the upcoming home World Championship.

“I am really happy with leaving the team by the time it returns to compete in the European Cups,” said Bonitta after the 3-2 victory over CUNEO. “We did something really big in these Playoffs which compensates for the ups and downs we have gone through during the regular season.”

PHOTO OF THE DAY: The famous brother and sister in volleyball

ITA M: Michele Grassano is back!