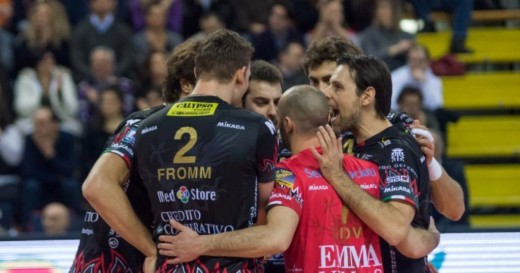 Perugia started very well and at the result 21-15 everyone thought that they will easily clinch the first set! But away side made 4-1 run and Grbic had to call for time out!

In the second set, Piacenza raised level of play to the higher level but Perugia didn’t allow them to tie the score. At the result 15-15, Atanasijević & co. started playing their familiar style and after a few good defenses and attack they had 21-16 lead!

Piacenza didn’t manage to back in game, Vujević was the man who used the set point and gave his team 2-0 lead!

It seems that Piacenza surrendered after two sets. Perugia didn’t have any troubles in the third part of the game and they easily clinched the win!

It was the fifth consecutive defeat of Piacenza and they are now in tough position in race for playoffs!

The Serbian opposite Aleksandar Atanasijević was the best scorer with 15 point, Fromm added 10. On away side, Aimone Alletti scored 11.

This team deserves a medal for outstanding defense (VIDEO)