ITA M: Perugia brings reinforcement from Brazil instead of Anderson?

Sir Safety Perugia counted on Matt Anderson as its reinforcement for playoffs, but since the American receiver probably won’t come from Zenit Kazan, the Serie A1 participant turns to other solutions. 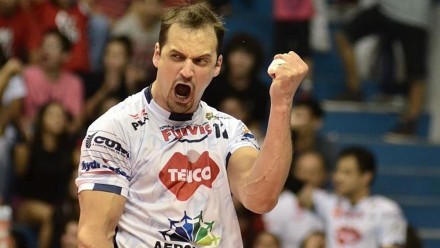 According to volleyball.it, reopen of market started a lot of new rumors and assumptions.

Perugia is now looking around for the new player in the Brazilian championship, where, however, it already set its sights on Lucarelli from Sesi-SP, but for the next season.

With the elimination of Taubaté/Funvic from the playoff semi-finals, several interesting players are ‘liberated’ from commitments in the Brazilian championship.

Among others – the setter Raphael, the middle blocker Sidão, the receivers Lipe and Dante and the opposite Lorena.

The market is opened until midnight on April 11, which is the eve of Game 1 of the playoff quarter-finals.

KOR M: Do you know who won match point for Rush&Cash? (VIDEO)

New bombastic statements form the ‘cucina Italiana’.
They don’t have the best league in the world, nor they give the best contracts…what they have are the best ‘spin doctors’ 🙂

Players all over the world, are trying to finish the season as soon as possible, so they can get to Perugia until midnight 11th of April :)))

The problem are not the players, but the (president) club eho wants them for this short period of time