WC M: Strong resistance from Tunisia, Italy wins after all!

Italy took the straight sets victory against Tunisia, but it was not an easy win. Not at all! 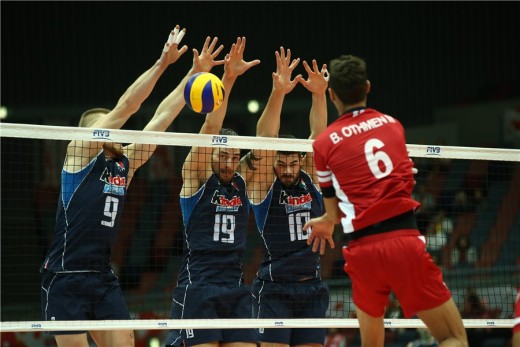 Only in the first set, Italian side was much better than the rival. They didn’t leave any space for Tunisia to try to decrease the result and make this part of the game a little bit more exciting.

But, in the second set, Tunisia started reading Italy’s actions and with some good solutions in attack they were very close to the rival. They were trailing by two 24:22, managed to save the first set point of Italy, but mistake from the service line gave Blengini’s side 2:0 lead.

As we already said, Tunisia started playing much better and at the result 10:10 in the third set, they made 4-0 scoring run and it was kind of shock for Italians. Zaytsev & co. tried to make comeback and they somehow managed to do it. At the result 21:21, Buti made a good block and after Moalla’s mistake Italy had two points of advantage 23:21! A few minutes later, Italy took the victory!

WC M: Canada without solution for Muserskiy, Mikhaylov and Tetyukhin!

WC M: Speraw – “Each match had a political backdrop”