Ten years ago, as the final round of the men’s Junior European Championship was held in Poland, and namely in the city of Katowice, Italy did finish atop of the charts for the last time. Since those golden days the next generations did regularly fail to add another honor to the showcase of their country; yesterday, as they started their campaign in Gdynia, the guys mentored by Marco Bonitta, really left a good impression as they confidently downed Russia in three straight sets. 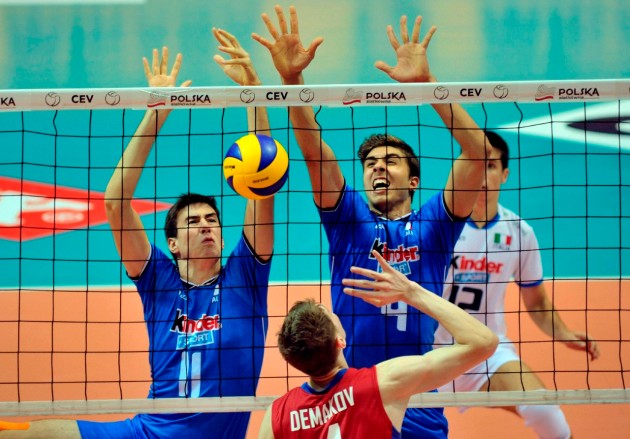 Top scorer for the “Azzurri” was Luigi Randazzo (pictured, #4), an 18-year old wing spiker who stands at 199 cm and anchored his side with 16 points. Randazzo hails from Sicily and originally started his sports career in judo. Some 6 years ago, as he was about to fly from Catania to participate in the finals of the national championship, his flight was cancelled as the well-known volcano Etna had erupted on that day thereby covering the runway of the local airport and causing some more disruptions.

This quite unexpectedly and abruptly stopped his career in judo and Luigi switched to Volleyball under the guidance of his father Franco. By the age of 14, as he was playing the final stage of the regional league, he was scouted by one of Italy’s leading Volleyball forces, i.e. Lube Banca Marche MACERATA. He says: “In the last four, five years my life has completely changed. Lube scouted me and I decided to join their special program for the youth. It is not easy to move away from home at this tender age but luckily the club and my teammates helped stand that feeling of home sickness. I do not regret anything, even judo; this background still helps me a lot in terms of agility and general physical conditioning”.

Apart from being a member of the junior national team, Randazzo just completed a memorable club season where MACERATA claimed the U18 national league and he was even included in the group that claimed the major Serie A1, even though he did not play at all there. “I can still remember my debut in the European Cups against Crvena Zvezda BEOGRAD. I was only 16 and this broke all previous records in the history of the club. We were leading quite comfortably in the score and I was asked to join the game by the end of the third set, my legs were literally shaking”.

Even though the European campaign in Gdynia started well with a 3-0 win over Russia, still this is a very long run with many strong teams along the way to a spot in the semis. Randazzo looks forward with optimism as he stresses: “My mentors Berruto and Giuliani have significantly helped in my development as a Volleyball player, but I am grateful also to my teammates like Valerio Vermiglio, Alessandro Paparoni and Cristian Savani for all their advices. My dream, even though it may sound a little pretentious, is to move up to the next level and possibly play for Italy at the next Olympics in Rio de Janeiro”.