Do you think it’s possible to be a mother and at the same time a volleyball player? If your answer is “no”, you should surely change your mind! 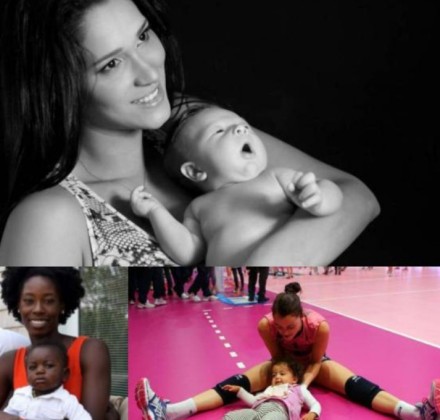 In the last years, lots of players have decided to become mothers, and some of them are the most famous of the entire volleyball world.

Let’s focus on Italy. Serena Ortolani is one of the most famous “volleyball mothers”. She has a little daughter Gaia, who is three years old. She recently got married to Davide Mazzanti, who is the head coach in her team, Imoco Volley Conegliano. Ortolani is now one of the Italian athletes who will take part to the Olympic Games in Brasil. Her family won’t surely follow her in Rio de Janeiro, but it will surely support her from Italy.

The italian championship can also add another famous mother in its list, whose name is Jovana Brakočević Canzian. The Serbian opposite, who will play in Modena next season, recently gave birth to her son Viktor, and after only few months away from the volleyball court, after a hard work and a hard training she is now ready to fly to Rio to play with her national team in the Olympics.

Also the American receiver Megan Hodge Easy is a mother! She is married to Omar Easy, one of the most representative players of the American football, and she has a little son, Easton Javier.

Together with Serena Ortolani,  Jovana Brakočević Canzian, Jenny Barazza and Valentina Serena, Megan  was one of the five mothers who won the last Italian championship with Imoco Volley Conegliano. She won’t play in Rio with USA but she is ready to fly to China for the next championship.

If we talk about mothers in the world, a new mothers is Manon Flier-Nummerdor. She is married to the Dutch beach-volleyball player Reinder Nummerdor and they recently announces the birth of their first baby. Because of this sweet and happy event, Manon won’t surely take part to the Olympics with the Dutch national team.

But maybe the most famous mum of the entire volleyball world is Jacqueline. After a sad loss of her first child, in 2013 she gave birth to Paulo Arthur. The Brasilian receiver is married to Murilo Endres, one of the most popular male volleyball player, with who she creates an incredible volleyball family!

Jacqueline will take part to the Olympics in Rio, but Murilo wasn’t chosen by his head coach, so he will surely cheer for Jacque from home, together with the little Arthur.

So, do you now think that a volleyball player cannot be also a mother?