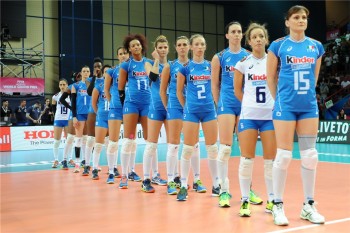 Italian volleyball star was officially called in the Olympic team that was about to represent Italy at the upcoming Rio 2016 Games. However then the Italy head coach Marco Bonitta sent her a text message on the day of leaving to Rio, in which he informed Diouf that she would not travel with the team to Rio as he made a last minute change in the roster!

That decision made Diouf quite angry, while the player got a support from her club Busto Arsizio.

“I imagine the state of mind of our player. She has already been put in the Olympic team, while then her dream of playing in Rio just suddenly vanished. I am sure that the whole communication with Diouf should have been managed on a different way. We must show more respect to our players in future. Still, Valentina Diouf will have the opportunity to demonstrate her full quality here in Busto Arsizio. We fully believe in her and we are convinced that our next season will be spectacular,” said Giuseppe Pirola, president of Busto Arsizio.