Portugal’s youth national teams will join the “Torneo Navidad” from December 27-29 in Guadalajara organized by the Royal Spanish Volleyball Federation (RFEVB). The boys will play against Spain, Portugal, Greece and Tunisia. 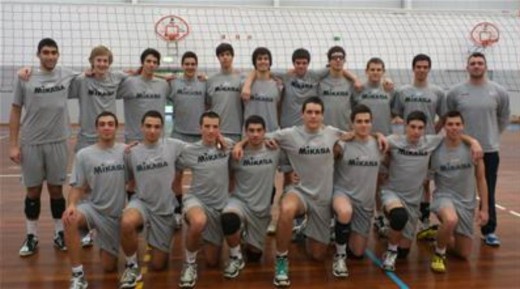 The boys’ competition will be joined by the national teams of Spain, Portugal, Greece and Tunisia with the prelims scheduled for December 27-28 and the finals coming up on Saturday, December 29, while the girls’ tournament will feature the likes of Spain A, Spain B, Portugal and the club Feel Voley Alcobendas.

Some fifteen years ago the Portuguese Volleyball Federation (FPV) acted as pioneer by setting up a permanent training camp for the development of its youth national teams. Since that time first-class conditions have been regularly provided to all junior and youth teams with the last training camp having taken place in Vila Nova de Gaia, whereby the FPV has started its development project for the next quadrennial whose climax will be the 2016 Olympics in Rio de Janeiro.

This past October 5 two members of the youth national team, José Gabriel Fonseca and José Nuno Gomes de Brito – both 16 years of age – received the “Rebelo Moniz” award established by the city of Resende to honor high-school students who have been able to combine sport with excellent results at school. A similar distinction was awarded in 2010 to Raquel Maia, i.e. another member of Portugal’s youth national team by that time, who stood out as one of the best students of her class at “Carvalhos” high school. Maia, who was only 15 then, was also celebrated at the so-called Sports Gala promoted by the city of Guimarães and received the “Female Young Revelation Award” that includes also a sports scholarship. Though she was attending a permanent training camp, having to cope with a very busy schedule and being away from her family, Raquel was still an outstanding student who showed that it is possible to combine school obligations with a career in competitive sport.

POL M: World League review – Poland in a League of their own