The hosts Slovenia won its opening match on the 2013 CEV Youth Volleyball European Championship – Girls got started on Thursday in Nova Gorica against Romania. Maja Mihelj had a good game. In the other match, Buglaria defeated Slovakia. 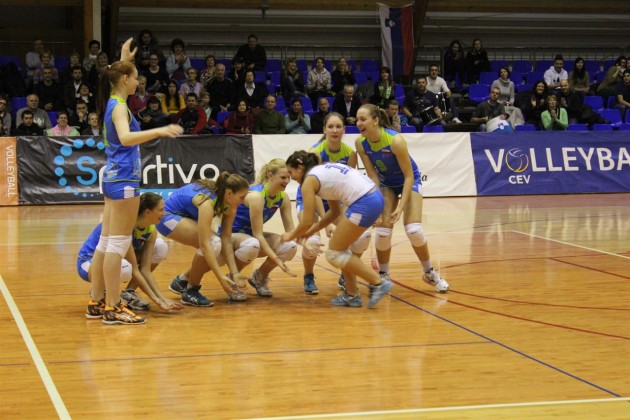 The match with Romania did not start that well for the home heroines of Slovenia (pictured) who were trailing by four points at the first technical time-out of the first set. However, after scoring six points in a row, Slovenia flipped the charts around and eventually seized that section with the score of 25-21.

With Maja Mihelj standing behind the serving line for 11 consecutive rallies, Slovenia broke away after the first mandatory stop and pocketed set 2 with the massive score of 25-9.

Things did not change much also in the third set even though Romania attempted what would have been a late comeback. Slovenia eventually sealed the final 3:0 (25-21) thereby showing its intention to finish atop of the charts in the group to qualify for the final round of the Championship that will be co-hosted by Serbia and Montenegro in March.

To round out the program of the first day in Nova Gorica, Bulgaria cruised to a 3:0 win (25-20, 25-18, and 25-11) over Slovakia to confirm its credentials as one of the pre-favorites for the top positions in this Pool.