YEC M: Russia makes it three in a row in Jelgava

Russia seems continues in Pool B as the guys mentored by Alexander Karikov defeated Latvia in straight sets (25-17, 25-11, and 25-11) and after three rounds has remarkably conceded no sets at all to their opponents so far. Viktor Poletaev and Aleksandrs Avdejevs were the top scorers. 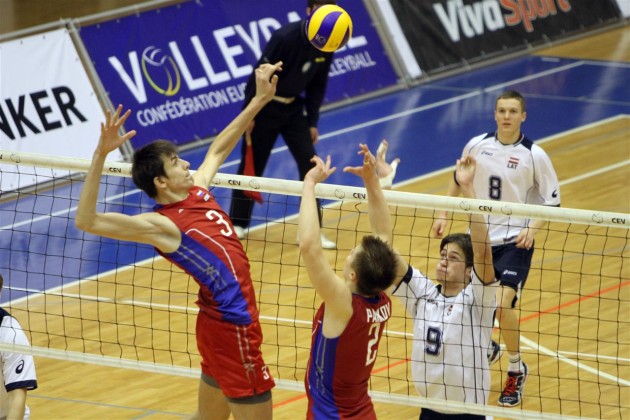 Viktor Poletaev paced the winning side with 11 points, while Aleksandrs Avdejevs registered 7 for Latvia.

“Our sole goal is to win every single match. We know we have to play each match the best we can because otherwise you do not know how this may end. This is a good tournament and the other teams assigned to this group are good too” said Russia’s mentor Alexander Karikov after the game.

Similarly to Ukraine, Slovenia also claimed its second win in the competition thereby remaining in contention for a spot to make it to the final round. Slovenia comfortably disposed of Estonia in three sets (25-20, 25-21, and 25-18) with Sergej Drobnic scoring 13 points while Ziga Donik added 12 to his side’s count. Estonia’s star Oliver Orav was once again the top scorer of the game with 19.

“They served extremely well and this way they imposed their dominance on the game” stressed Estonia’s mentor Toomas Jasmin after the game. “This explains why the result isn’t positive for us”.