To round out Friday’s program on the qualifying tournament for the Youth European Championship the Czech Republic suffered their second defeat, as Belarus defeated them 3:2. Radzivon Miskevich, Donovan Dzavoronok and Tomas John gave their statements. 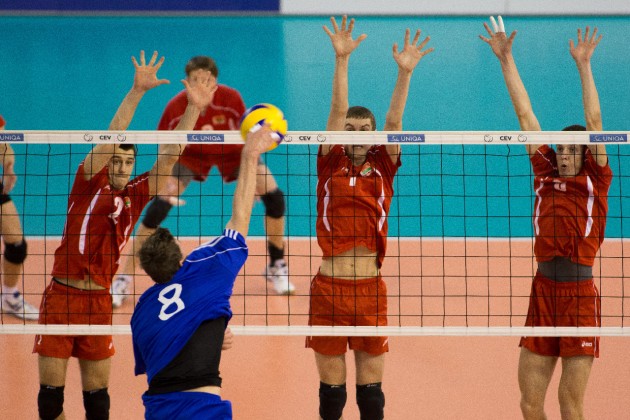 With two defeats after two rounds of play, the chances for the Czechs to make it to the final round look already compromised especially as they will have to play Italy on Monday for the very last act of the tournament.

The Czechs caught a disastrous start with Belarus claiming the first set after only 21 minutes (25-9); however, the home guys – fired by their fans – stormed back in set 2 and 3 before they again lost control of the operations and Belarus could prolong the match to the tie-break. After a good start (5:5), the Czechs felt the pressure and they could eventually score only one more point while Belarus cruised away to claim their first win in the competition.

“It was a very tough and long match, we are tired but happy” said Belarusian Radzivon Miskevich. “After winning the first set so easily, we knew that the Czechs were certainly going to fight their way back. This eventually turned into reality but we did not lose composure and our motivation was still there, so we played a good fourth set and we eventually continued with that same quality to win also the tie-break”.

“After losing the first set, we played really well and quite aggressively re-opening the game but we lost control in the tie-break where we made a terrific number of unforced errors” explained Czech wing-spiker Donovan Dzavoronok.

“Before the start of this game we had agreed upon going for a straight victory, so by losing at the tie-break in the end we are missing two points” said Czech mentor Tomas John after the game. “It is simply too bad that we could not impose our tempo in the fourth set but we are also the youngest team in the tournament and this was to be felt during the tie-break where my guys were nervous and lacked consistency”.

YEC M: Russia makes it three in a row in Jelgava

JUST WOOW! Is this the best point...