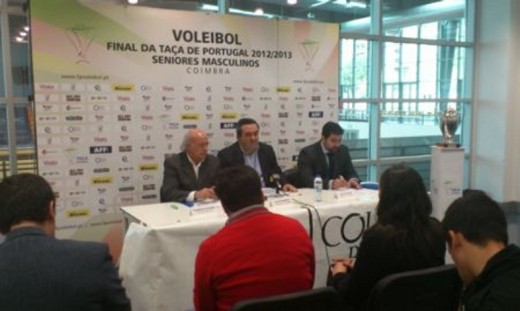 Most important facts from the conference: all ingredients – “a good flag, two good teams and a good home” – are gathered to perform a “great show“. Vitória Sport Clube, and Guimarães, are to meet on Saturday at 19:00 (local time), in the Cup final game.

Luis Providence gave welcome to all those who are directly or indirectly are involved in the competition:

“Coimbra is focused on sports and the opportunity of organizing the end of a competition as important as the Cup of Portugal is an incentive that will make us work harder and better for the city.”

“I would like to give a warm welcome to people who come from Terceira and Guimarães, as well as to all those who will attend the Final, either as part of the public or representatives of media organs.”

“I would like to thank the City Council and the Portuguese Federation of Volleyball for bringing once again to town a competition as important as the Cup Final in Portugal. I believe we will see a good game on Saturday.”

“The Volleyball Association of Coimbra will always appear as a collaborator of the initiatives of the Portuguese Federation of Volleyball.”

“On behalf of the Federation, I would like to thank the City Council for the support they have given us in recent years and the opportunity to bring back to the Coimbra Cup Final, and thank AV Coimbra on all the collaboration.”

“The collaboration with the City has been a fruitful marriage, because it allows us to show a good volley center as important as Coimbra.”