Russia and Serbia, both undefeated in the 2013 FIVB World League, will face off this weekend during a match that could end Russia’s longest current World League winning streak of any team. Brazil faces Argentina, Italy challenges Cuba. 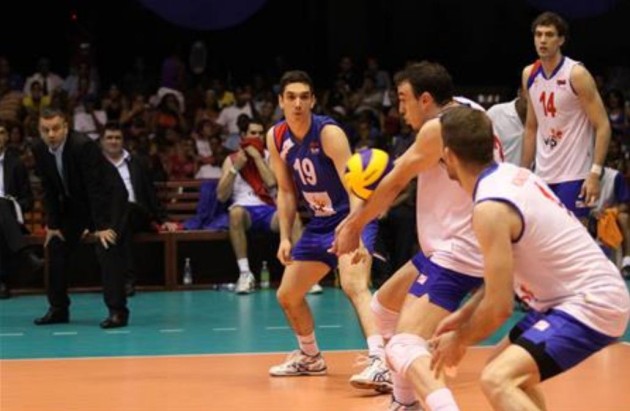 The teams will kick-off week three of the World League, competing Friday at 15:00 in Kaliningrad, Russia, and again on Saturday.

Russia has won five consecutive World League matches, dating back to last season. The team is backed by Dmitriy Muserskiy, who is the best blocker in the tournament so far, with an average of 1.14 per set.

Serbia, however, joins Russia as the only two teams to have attained maximum points so far in the 2013 World League. If Serbia wins the first match against Russia, Serbia could improve 3-0 in the World League for the second time since it began competing in 2007.

The first day of week three will also feature undefeated teams Brazil, who will compete against Argentina, and Italy, who faces winless team Cuba.

If Italy wins the first match against Cuba, it will mark the fourth consecutive year in which it has won at least its first three matches of the World League. If Italy wins both matches, it will improve to 4-0 for the first time since 2011, when it started 6-0.

France, who has also not won a match, plays the USA in Tulsa, Oklahoma on Friday and Saturday. If the USA sweeps France this weekend it will have won three of its first four World League matches for the fifth time in the last seven years. On the other hand, if the USA loses both matches this weekend it will start 1-3 for the first time in the World League since 1993 (it started 0-4 in 1994).

After sweeping Japan to open the 2013 World League, Korea dropped both matches to Finland last weekend to fall to 2-2 and third place in Pool C. However, if Korea wins both matches against Canada on Friday and Saturday, it will equal its best ever start to a World League season after six games (4-2), previously achieved in 1993. These will be the first matches Canada has played against an Asian country in the World League since 2007.

Japan, which currently has the longest current World League losing streak at 22 consecutive matches, and can equal the World League record this weekend of 24 straight losses, will try to regain power in its match against Finland on Saturday and Sunday at home.

In five of the 24 matches of the 2013 World League thus far, the team that lost the first set has come back to win the match. Finland is the only team that has been involved in two such maches, once at the comeback winner (against Korea) and once as the comeback victim (against Portugal).