On Friday the home heroines of Belgium caused a real sensation in what was their European League debut by beating Serbia, the 2011 European champions and three-time winners of this competition (3:1; 20-22, 21-8, 21-11, and 21-18). This and other volleyball news read on Worldofvolley.com. 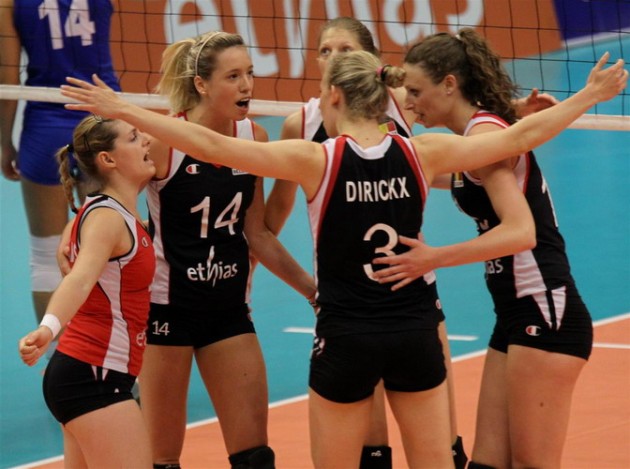 Even though Serbia did not travel to Leuven for the first round of play in Pool B with their best players this remains one of the greatest results in history for the Belgian ladies who were anchored by their setter Frauke Dirickx.

Serbia started out very strong going up 12:5 in the first set paced by Adela Helic in attack and by the serves of Sofija Medic. However, things changed after Belgium stabilized their reception and via the attacks killed by Lore Gillis and Charlotte Leys the score was eventually leveled at 15 all. Belgium moved even to the front (20:18) as Gillis, Leys and Hélène Rousseaux continued to score but missed out on a couple of set balls before Jelena Blagojevic and Jovana Stevanovic sealed the final 20-22 for Serbia. Belgium did not lose composure after missing this opportunity and actually stepped up in the second set with Leys and Angie Bland giving a hard time to Serbia with their blocks and attacks.

Freya Aelbrecht also did a good job for the home side and the second set was quickly over (21-8). Aelbrecht was the real shining star also in set 3 where Belgium was helped also by the good performance delivered by Leys from the serving area. Serbia attempted a late comeback in set 4 powered by Helic but Belgium got back on track on a serving turn by Ilka Van de Vyver (from 9:14 to 14 all) before Els Vandesteene and Aelbrecht sealed the deal for the joy of the home audience.

“This is the greatest win ever claimed by this team” said a euphoric head coach Gert Vande Broek. “Dirickx is a world-class setter and player, but the whole team has got the right maturity and all players who joined the game did show a great improvement. Before the start of this campaign I had said that the goal is to see the team improve. It is rather difficult after seeing what they have done tonight”.

Serbia’s mentor Aleksandar Vladisavljev could not understand why his side lost control of the game after an excellent start: “This is a new team and we’ll improve by the end of the European League”.