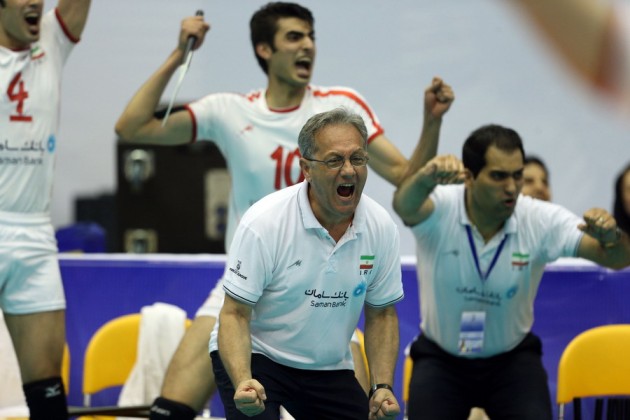 ”We are glad for this win,” said Serbia’s head coach Igor Kolakovic. “The situation was not good for us. We played well in first and second set. Iran changed opposite player and they became good. They had good services they were very well in defense.”

More than 12,000 fans flockd to Azadi Hall in Tehran to watch the team’s first-ever home game of the FIVB World League, in a thrilling five-set match.

“I should congratulate to the spectators,” said Serbia’s head coach Igor Kolakovic. “They created good Atmosphere for home team.”

Serbia showed the upper hand in the beginning of the match, gradually in the first set using the efficient spikes of Atanasijevic and the blocking by Marko, until Iran players got the control of game with a three point lead. Serbia, however, showed more awareness by the end and won the first set 26-24.

The second set was in favor of Iran, who had good spikes and sound blocks and by 8-4 got the first technical time out. Iran continued with weak blocks, falling behind and allowing Serbia to take the second, 25-23.

In third set, Iran kept a lead, but Serbia showed motivation to win Spectators were warmly backing up home team, as Serbia struggled from behind 16-22. With Farhad Ghaemi’s serves and spikes of Mousavi, however, Iran won the set 25-17.

Iran kept its lead in the fourth set, while Serbian players fell behind of home team. Iran was leading and kept it until winning the set 25-14.

Set five proved the most exciting, as Iran saved one point by winning set 3 and 4 through the leadership of the experienced setter Saeed Marouf, extening the match to tiebreak. The tiebreak was controlled by the experience of Serbian players, as they lead 8-6. Iran players showed upper hand and made score tie 8, but Serbia pulled ahead to win the set 18-16.

“We are happy with the win,” said Dragan Stankovic Serbia’s captain. “We suffered a lot of pressure and we made a lot of mistakes.”

“We lost to the experience of Serbia,” said Saeed Marouf, Iran’s captain. “We took third and fourth sets, and in the tiebreak we were doing equal job. I think all of us are satisfied with our play.”

“We were expecting to win but we lost,” said Iran’s Julio Velasco. “We did good play in two sets in last set we made score tie 16. Our service was not good in first set. We changed Mahmoudi and he did a good job. In every time we learn from Serbia They showed us how to get use from good defense. My players’ fighting spirit of was fantastic until last moment.”