In their second match at 2013 FIVB Women’s U20 World Championship, Japan booked their second victory by sweeping Colombia in straight sets. Doi Sakura, Oda Momokaled and Danna Escobar were the top scorers. 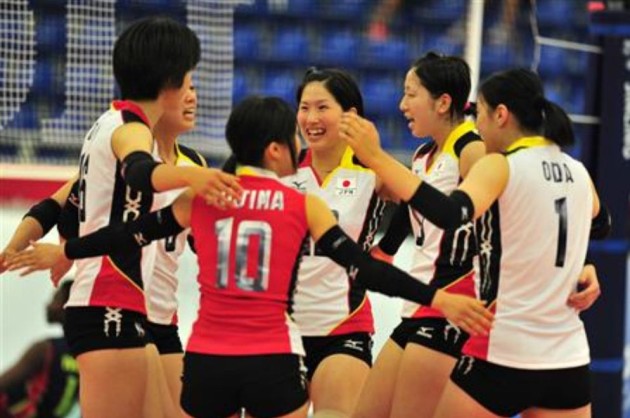 Wing spikers Doi Sakura and Oda Momokaled led Japan with 13 points each while on Colombia’s side Danna Escobar booked 16 points for her team.

Right from the beginning of the match, Japan put a lot of pressure on the Colombian defence. The tall and athletic South Americans started slowly, but geared up towards the end of the first set. However, Japan proved too strong for the team of coach Mauro Marasciulo. The story of the match did not change in the second and third set with Japan sailing to their second win in Brno, Czech Republic.

Japan coach Yasuhiro Fukuda: “We are happy with the second victory, but I am still not completely satisfied with the liaison between setter and middle blockers. It still needs to be improved.“

Japan captain Momoka Oda: “We are very pleased that we were able to win again. Our performance is getting better and better.“

Colombia coach Marasciulo Mauro: “We committed many mistakes today. Our passing is still not good enough. We played quite well at the net, but could not hold Japan’s pace.“

Colombia captain Andrea Estrada: “We face a mental problem. We act still too hectically. If we can fix that and our passing improves, we are able to play much better.“

In an All-Asian duel, Japan will challenge China on Sunday while Colombia continue their Women’s U20 campaign against Thailand.